The Gaboury project is composed of 114 mining claim cells totalling 6,064 hectares located approximately 150 km SW of the Rouyn-Noranda mining camp and easily accessible by paved and gravel roads and 11 km East of former Loraine Mine that produced 600,000 tonnes of ore grading 0.47% Ni and 1.08% Cu (Source: SIGEOM GM 43679). The Loraine deposit was of magmatic mineralisation of NiCu dominant associated to mafic and ultramafic intrusions. 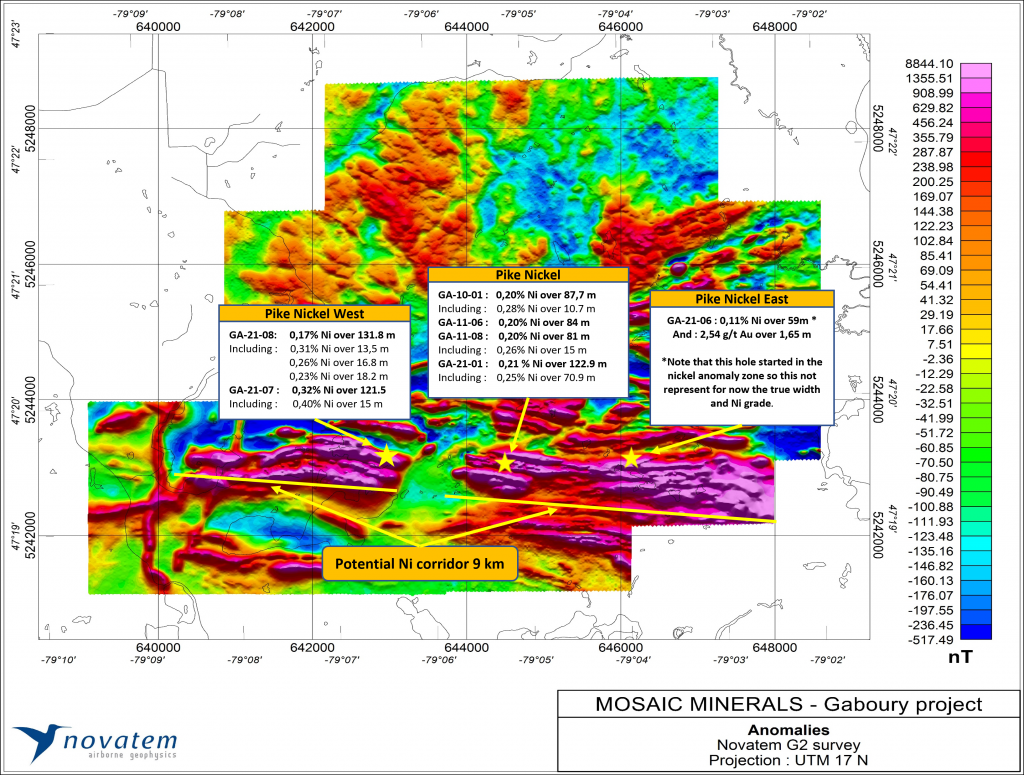 In Q4 2021, Mosaic Minerals drilled the property. The main objectives of this first diamond drilling program of approximately 1,500 meters extension were to test the lateral extensions of the Pike Nickel showing discovered by drilling in 2010 as well as to test the depth extension of the original discovery. 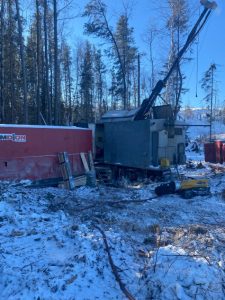 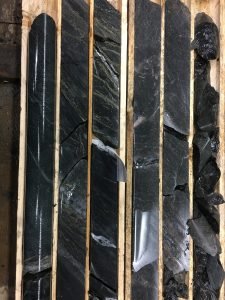 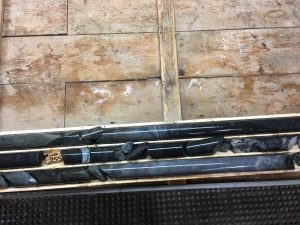 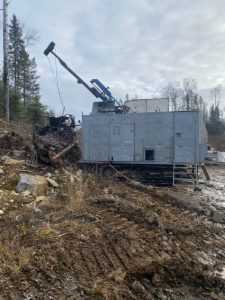 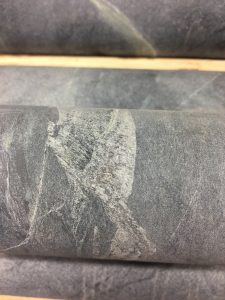 This same hole, however, intersected a previously unknown gold zone revealing a grade of 2.54 g / t Au over 1.65 m including 4.62 g / t Au over 0.8 meter. The gold occurs in a strongly magnetic, highly silicified iron formation with the presence of chalcopyrite. The company also plans to verify the gold potential of the eastern sector.

The potential nickel corridor is now more than 3.2 km along the magnetic anomaly.

The best results are listed below :

Copper occurrences also within the Gaboury property is the Pyke copper showing which is located north-east of the nickel occurrence. Reported Cu results ranging from 0.99% to 12.30% Cu in surface chalcopyrite veins at the contact with sheared andesitic volcanic rock (Source: SIGEOM GM 39147). Semi-massive mineralization there consists of chalcopyrite, pyrite and pyrrhotite in a calcite gangue. Limited drilling of some electromagnetic conductors did not yield significant copper results. Mosaic’s management will reassess this sector shortly to develop a better understanding of these surface copper occurrences and assess the property’s copper potential.

Gold occurrences within the Gaboury Property the Laverlochère and Brisebois gold occurrences revealed historical gold grades of up to 445 gAu/t in quartz veins ranging from 0.3 to 5 m thick, while another mineralized shear zone of between 2 to 25 m thick yielded gold grades of up to 8.8 gAu/t. Gold grades of 27.97 gAu/t Au and 9.51 gAu/t over 0.20 m were intersected in the G-18 drill hole on the Brisebois showing, while selected samples revealed grades of 0.71 gAu/t Au and 1.23 gAu/t Au. Copper results were also reported in historical works near these indices. These historical data are from GM 46167, GM 58164 and GM 04753 and are available on SIGEOM of MERN.

In Q4 2021, a previously unknown gold zone revealing a grade of 2.54 g / t Au over 1.65 m including 4.62 g / t Au over 0.8 meter was intersected in Hole GA-21-06. The gold occurs in a strongly magnetic, highly silicified iron formation with the presence of chalcopyrite. The company also plans to verify the gold potential of the eastern sector. 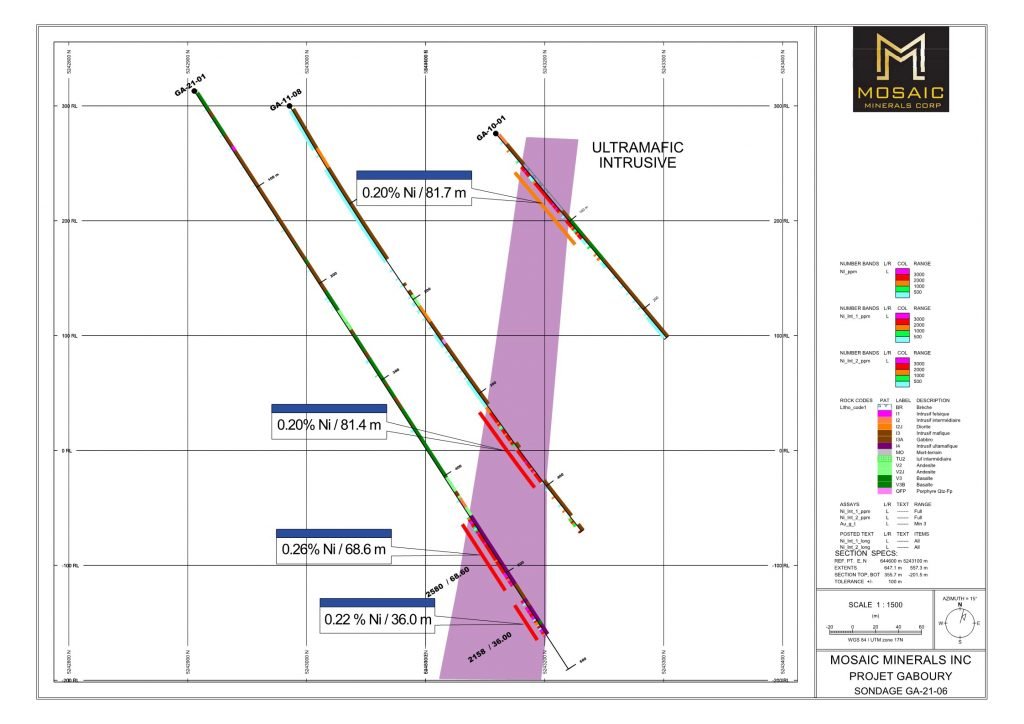 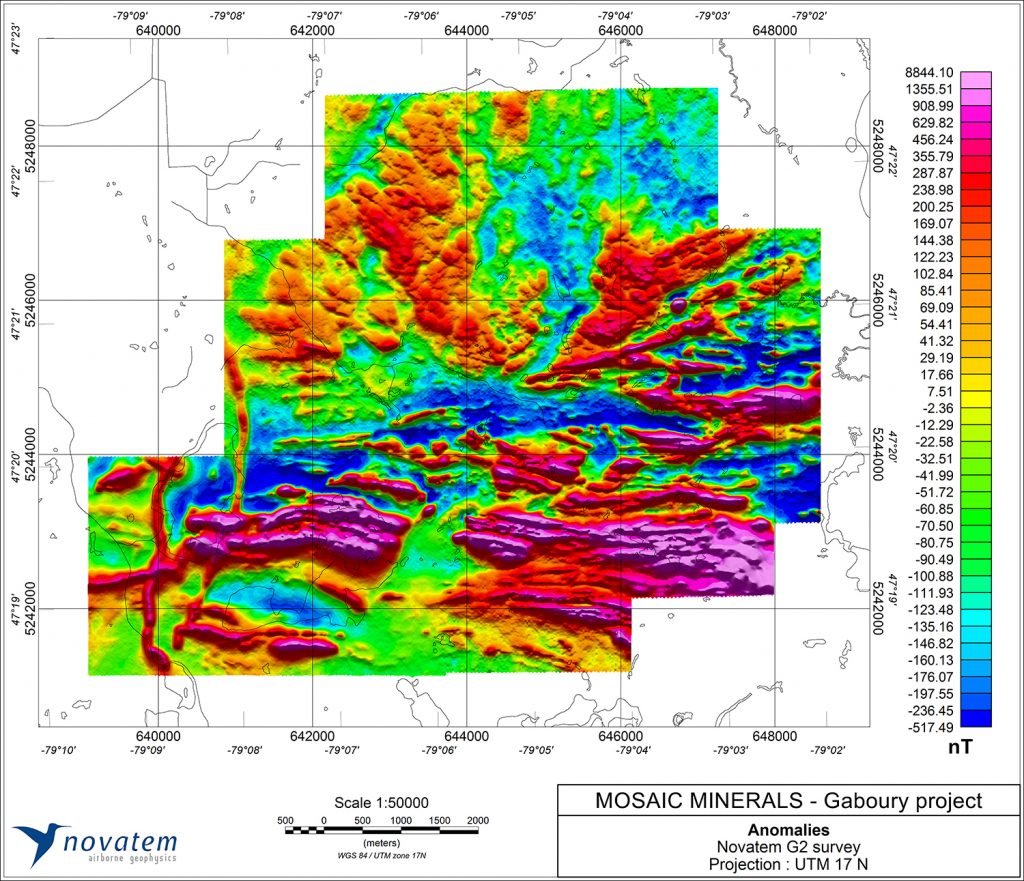 In 2010-2011, Fieldex Exploration now Fokus Mining Corp. drilled the Gaboury Property to test an Electromagnetic Max-min anomaly and that cut significant Nickel grades. The semi-massive mineralization intersected is located in a calcite matrix within a fracture and silicified gabbro.

The Corporation plans to start a new drilling program during Q1 2022. Depending on its financing capacity, the company is considering a program comprising around fifteen holes located throughout the magnetic anomaly for a program of approximately 5,000 meters.

Several showings of nickel, copper and PGE are in the environment of this magnetic anomaly of more than 25 kilometers long. In addition, during Fall 2021, Mosaic acquired by staking 13 new claims located in the western part of the property. 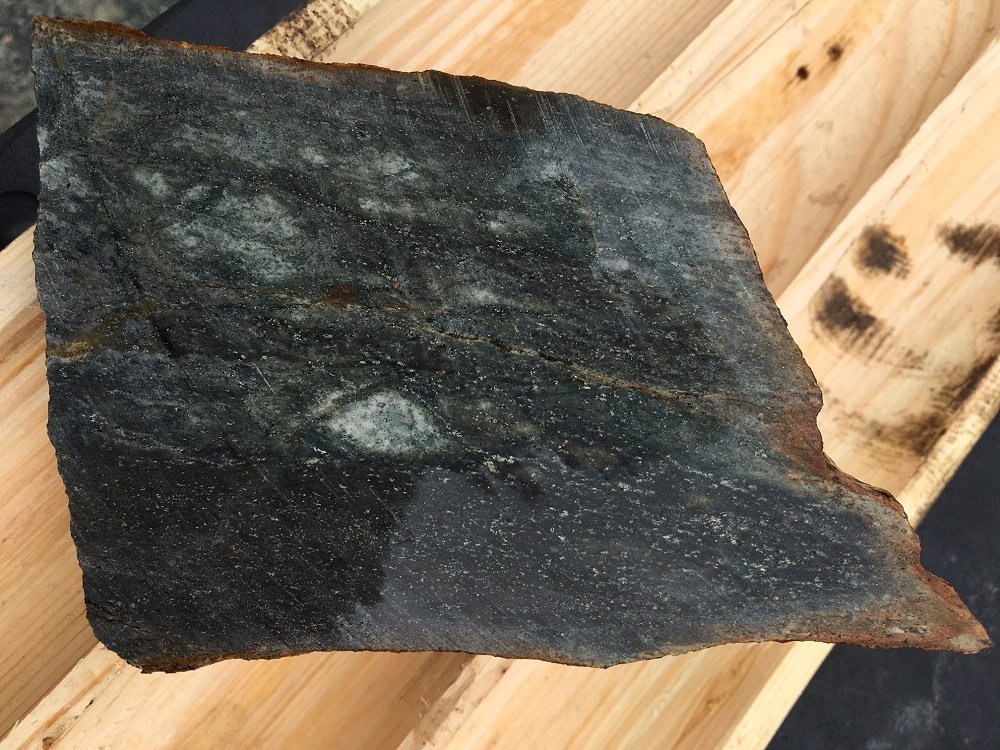 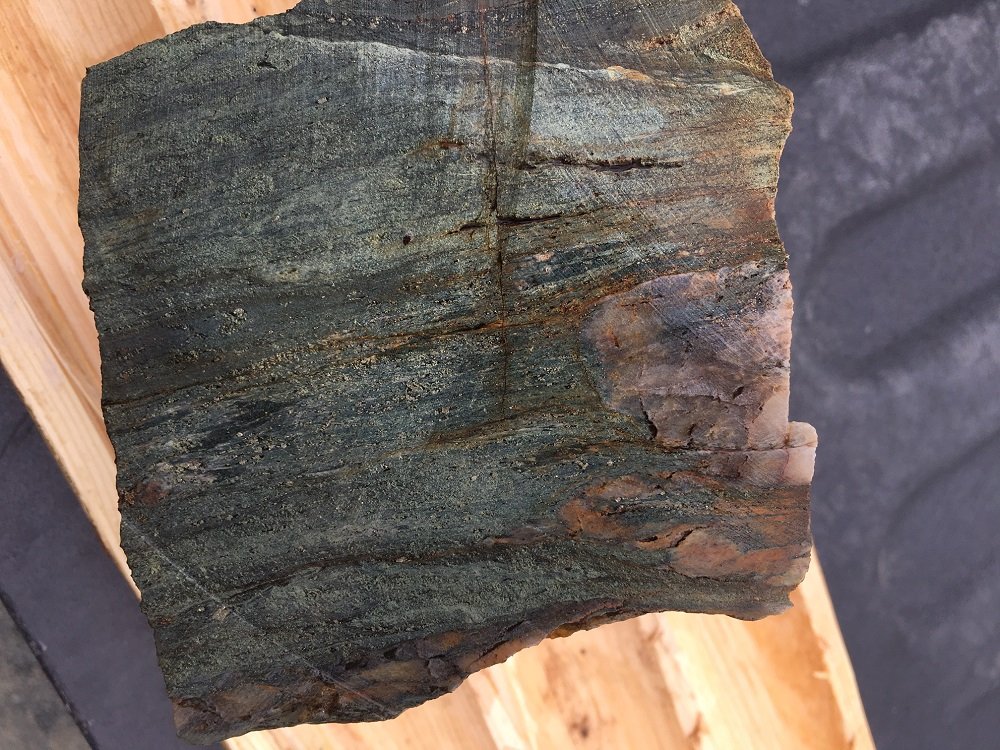 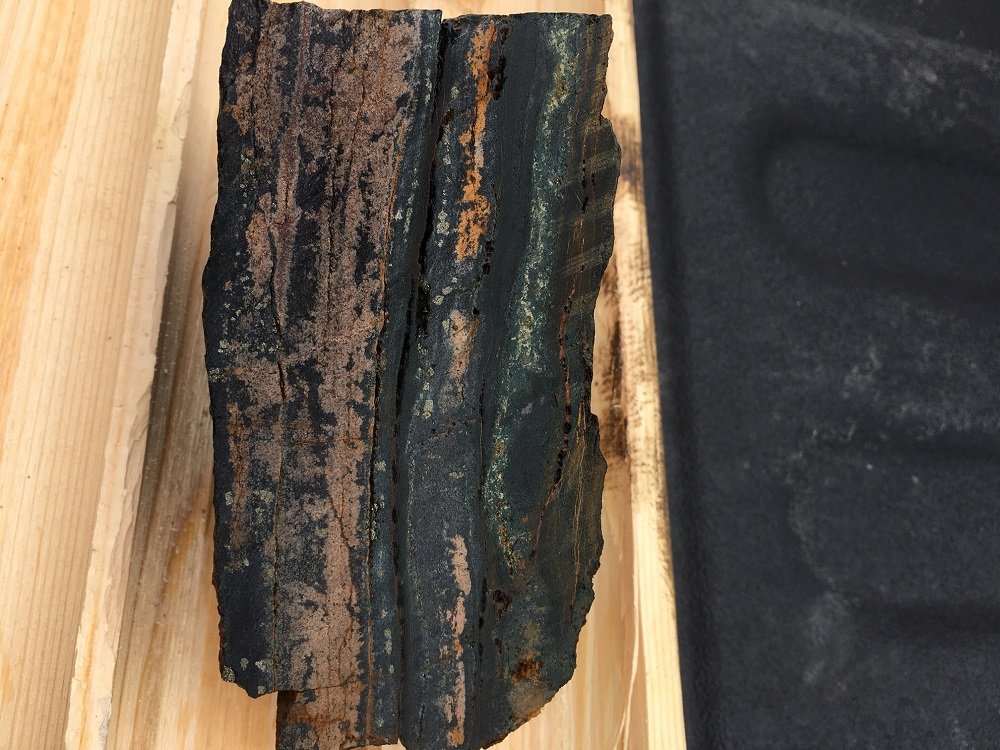 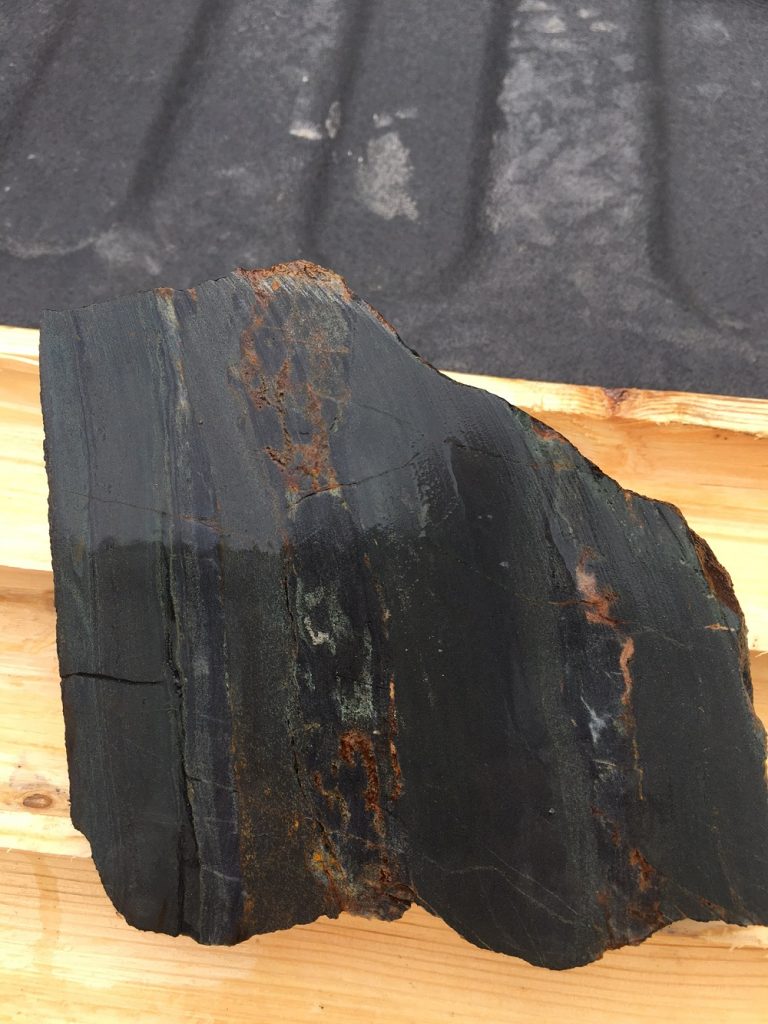 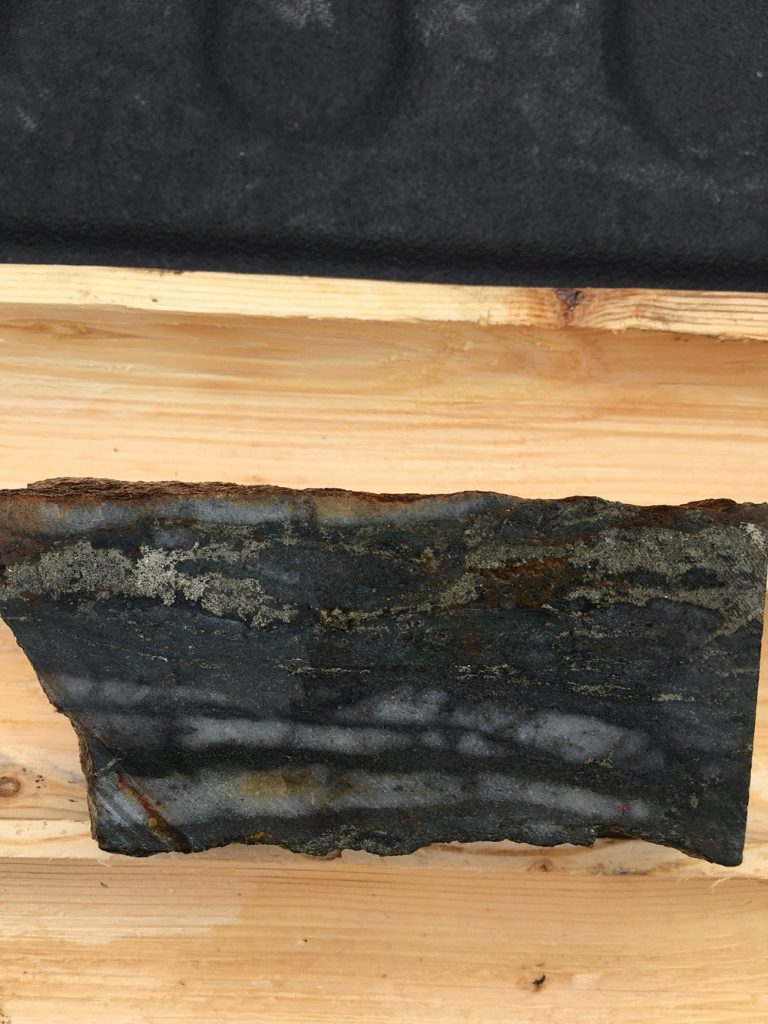 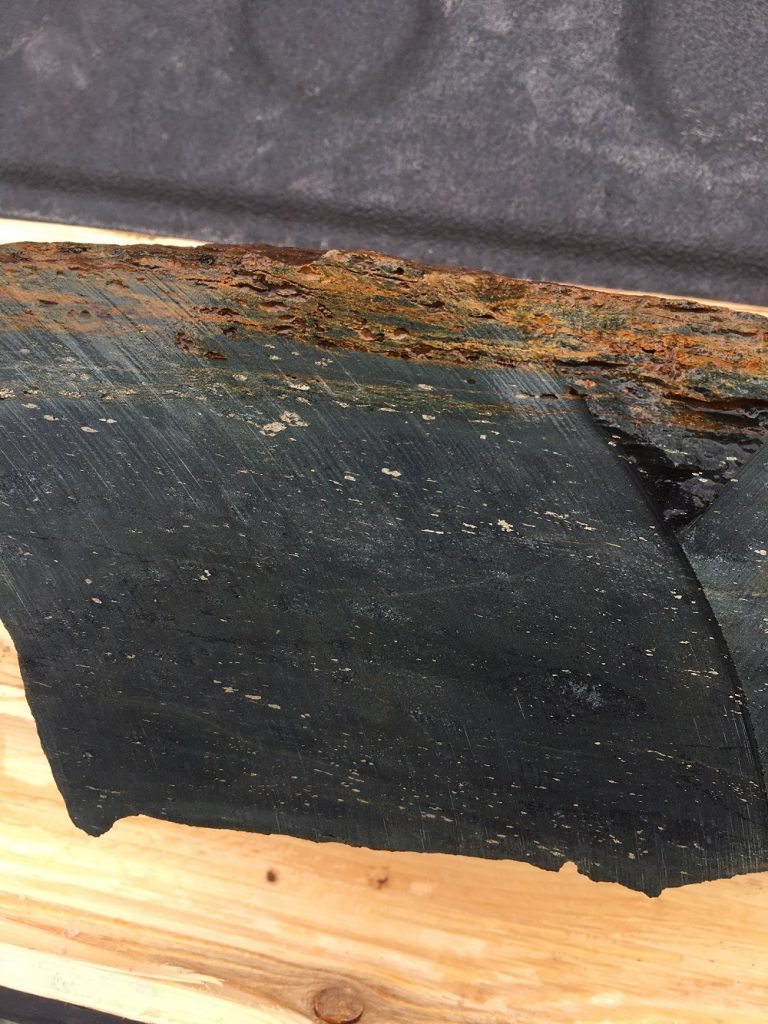 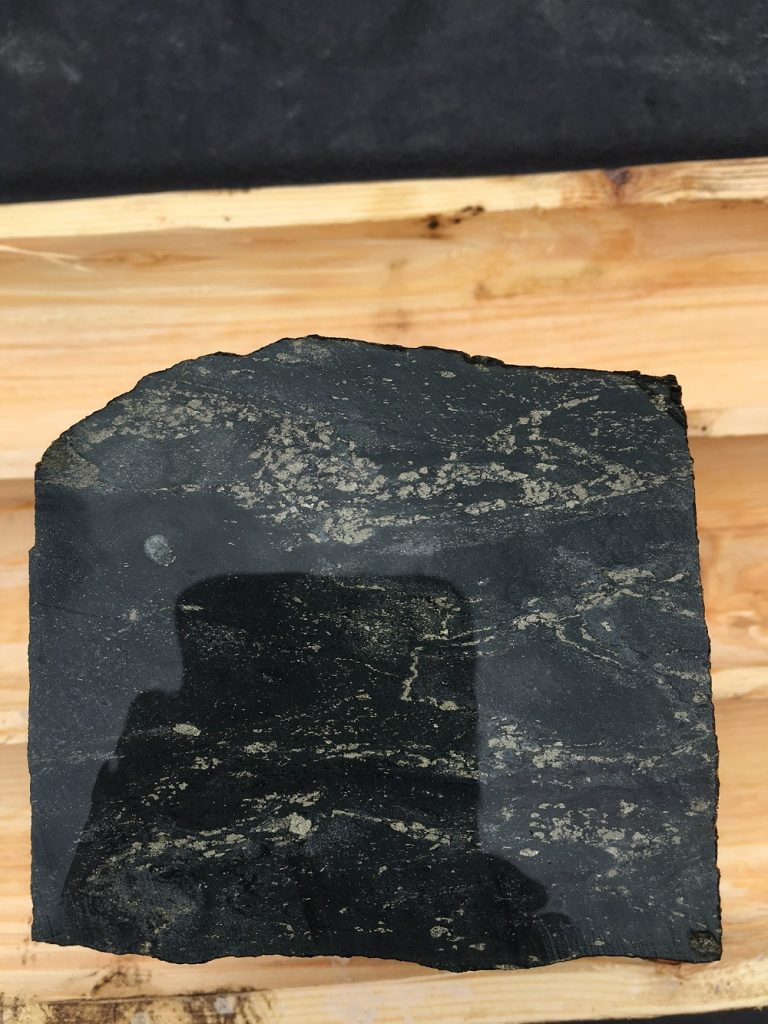 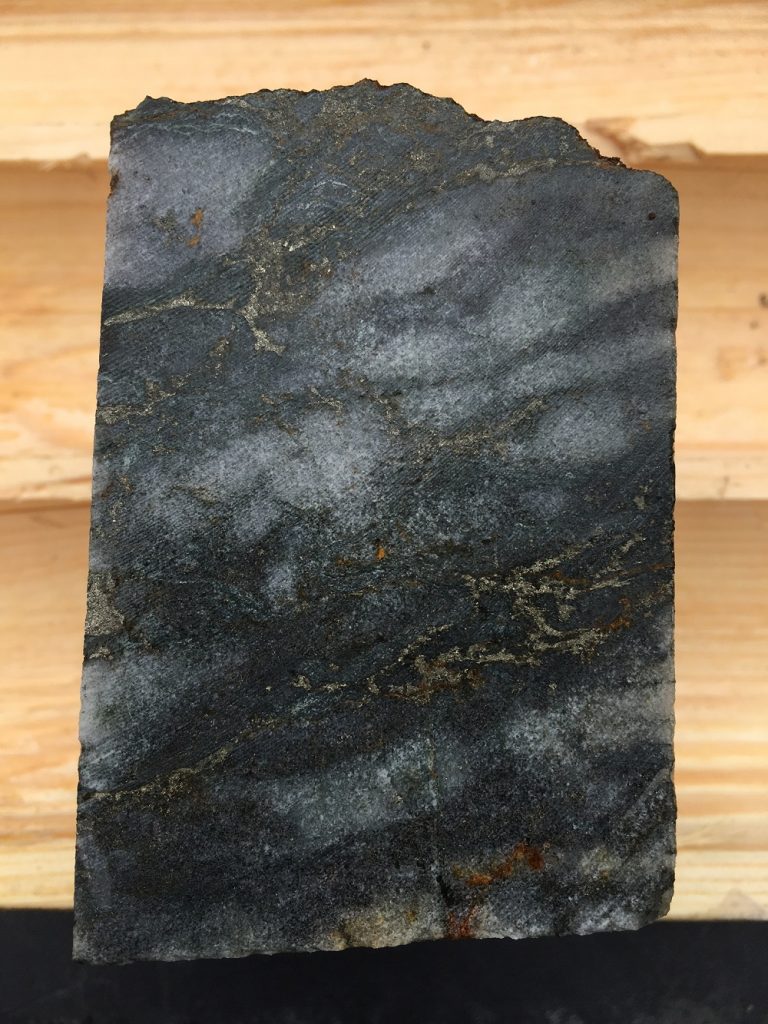